The mentality of the maison close 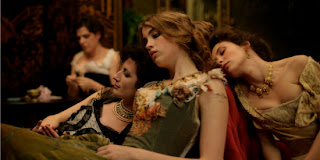 This still is from 'L'Apollonide', a film showing at the Cannes Festival this year, dealing with the  existence - one cannot call it life - endured by the women in a late nineteenth century French brothel. A 'maison close'.
In other words, a skin flick with the word 'culture' veneered over it to make it all right to be seen watching it.

It was made in part by monies supplied by the Ile de France Region and normally the President of the Regional Council would have been at Cannes to attend the showing.....but 'events, dear boy, events'....have made him change his mind.

Monsieur Huchon does not think it appropriate to attend festivities while his friend Dominique Strauss-Kahn languishes in durance vile on the other side of the Atlantic...and, besides, he was shocked at the violence of the action and the images presented.
No..he's not talking about the film with its obligatory nudity and violence.
He's talking about Monsieur Strauss-Kahn being photographed in handcuffs.

Everywhere but in France, the revelations of Monsieur Strauss-Kahn's predatory ways with women which have been made in the wake of his arrest on suspicion of sexual assault have roused debate on the role and status of women in French life.
In France, of course, no such debate will take place.
The incestuous circle of politicians and businessmen who rule France from Paris will make sure of that.
With the help of their journalist hangers-on.

France is Looking Glass Land and to understand how it works you have to go behind the mirror it holds up to the world and delve in the dirt and fly droppings behind.

France, you will be told, has a mature attitude to sex and infidelity.
What does this mean?

Well, delving among the fly droppings it means that  in the world of those Parisian circles that rule the country women are a currency in the wallets of men.

Like the song from 'Kiss me Kate', 'I'm always true to you, darling, in my fashion', where the lady boasts of her preference for diamond clips and Cadillacs over fidelity...where Mr. Harris, plutocrat, wishes to give her cheek a pat and a Harris pat leads to a Paris hat, French women in the ruling circles, far from believing the world well lost for love, believe the world is gained by granting their favours in  return for maintaining their foothold in the circle.
And their husbands agree.

Do these women care that this attitude makes life difficult for the young women entering the world of work, where, as the Hungarian woman who was the object of the attentions of Monsieur Strauss-Kahn at the IMF said
'I was damned if I did and damned if I didn't.'
Of course not.

They live in the 'maison close' of the life at the top of French society.....where life as the rest of us know it does not intrude, where all that matters is money, where people who believe in love and fidelity are regarded...with a Parisian shrug...as 'immature'.

Well, immature I may be, but it feels a lot cleaner to live in the real world than to have to associate with men who are not only NSIT (not safe in taxis) but NSIL (not safe in lifts) and having to act as their plaything.