Seduced by a Sheltie.... 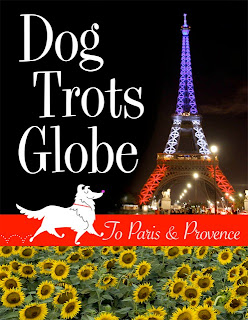 I am not the greatest fan of the view of France as being either Paris or Provence – there's an awful lot in between - but I am putty in the paws of a dog, particularly a beautiful Sheltie called Chula.

Thus it was that I allowed myself to be led through her adventures....flying from the United States to France....finding her paws in a new country....exploring St. Remy de Provence...and back to Paris for a walking tour before boarding the 'plane again.
This is a travelogue in a new guise, with the addition of good advice for people traveling with their pets – and some chirpy illustrations, too.
Chula's human, Sheron Long, writes wittily and well of her pet's adventures and the photographs are stunning. We're all used to the stock stuff; well these are photographs of places as they are, taken by someone with a real eye and there are quite a few I turn back to with pleasure.
In the enhanced e book format, there are also videos to play as you go along, some with music, some not, which give the book a different dimension – you have to see the video of the sheep filling the streets of St. Remy!
If you had asked me to read a book about Americans visiting Paris and Provence I would have probably said no...not another one...and turned it down.


I would have been wrong. It's a super little book and I heartily recommend it to you.

Oh...and Chula has a Facebook page too, which is more than I have - I always thought dogs had more intelligence than most humans...