The curious incident of the notaire..... 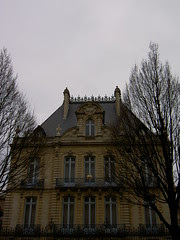 Buying property in France, you are obliged to use the services of a notaire. It's for your own good, you are told...he is a sort of watchdog...nothing gets by him.

Now, in England, I have never used a solicitor when purchasing property....long experience of the breed in other modes of legal practice convinced me that there was no way I would trust any of them with my money, my malt or my maidservant given their propensity to idleness, incompetence and inefficiency - all in slow motion, save for the demands for payment which drop on the doormat with alarming regularity.

Thus, when buying property I would do my own searches and ask my own questions, fill out the Land Registry forms and that was that...cheap, fast and accurate.

Then I moved to France, that country of liberty, equality and fraternity, where the fraternity of notaires, profiting from the lack of equality which gives them the monopoly in property transactions, take liberties with their clients' rights.

Before anyone jumps on me to tell me that their notaire is wonderful, has saved them heartache and money, let me now say that either you have come across a phenomenon of nature or you don't have much French.
There have to be good notaires....I did know one once, in fact, the man who undertook my first purchase in France. He was a phenomenon of nature and I didn't have much French, let alone any understanding of French property law.

Totally plastered at the post lunch rendez-vous, he fixed the estate agent with a well oiled eye and asked how he, the estate agent, could possibly imagine that he, the notaire, could proceed with a legal transaction when the person laying down money, me, didn't understand the proceedings.

The estate agent replied that he would translate. The notaire said that that wouldn't do. He, the estate agent, had an interest in the transaction, to wit, his commission. An interlude of argey bargey then took place, in which it was clear that the estate agent would lose, since the notaire had the obstinacy of all persons in the legal profession multiplied by the effects of having drink - in quantity - taken at lunch.

The seller made the mistake of intervening to suggest calling his nephew, who taught English at the lycee. Both men turned on him to ask how that helped as the nephew might have English, but also had an interest...the family connection with the seller. He retired to his corner, in need of the towel and bucket, while the two main combatants got on with the tussle.

The estate agent said that we were all assembled and surely we could get on with things. Suppose we put a clause in the act that he had done the translation and took responsibility?

No. He didn't have the right to take responsibility.

Did we have to have an official translator?
No. Just someone competent.

But I am competent. Ask the client. She understands my English.
Doesn't matter whether she does or not. You have an interest and are barred.


This was going to last a long time...the notaire was coming out of the euphoric post lunch stage and going into grumpy mode. He turned to me and explained in clear and accurate English the nature of the problem.

I risked an intervention.

As his English was so good, could he not explain to me as we went along?
Yes - in English - he could.

Would that do?
Yes - in English - it would, if I was agreeable.

We had a wonderful afternoon. He read the acte de vente in French, as he is obliged to do, gave me a copy to read and told me what it was about in English, together with various commentaries on the family history and circumstances of the seller, who, happily ignorant of the calumny, nodded and smiled as his name was pronounced. The estage agent, fascinated, had to have several of these details explained to him in depth - in English - and the sale process was finally completed as the dusk of a winter evening set in.

Unfortunately, this notaire was on the verge of retirement and his practice was taken over by the big firm in the nearby market town, so I lost this phenomenon of nature. It was to be some years before I had any further contact with the breed and it has been downhill all the way.

As I say, they have a monopoly of property transactions and despite what anyone tells you, they are not there to protect your interests. They are there to ensure that the state has you marked down for the future as the owner of a taxable asset - thus the obligation to use their services.

Not, mark you, that all the English know this. Or they do know this and have made improvements to the system. There is a growing market of English selling among themselves and avoiding the notaire altogether which at some point will come to the attention of the authorities. Mr. Sykes will sell to Mr. Dombey in pounds sterling and will move out. Mr. Dombey will move in. The tax authorities send the bills for the taxe d'habitation and fonciere to Mr. Sykes, who tells Mr.Dombey, who pays them. What happens when Mr. Dombey sells in his turn to Mr. Smartalek will be interesting, as at some point Mr. Smartalek will get his tax bill from Mr. Sykes via Mr. Dombey and will decide not to pay it. Mr. Sykes won't have a bank account in France any more so the taxman can't seize it or freeze it, so what happens then?

Take Mr. Sykes to court for non payment and enforce the judgement in the U.K.? What if Mr. Sykes has emigrated beyond the jurisdiction, or has just gone to ground? Send the bailiffs round to Mr. Smartalek to seize his television? Or make a forced sale of his house?
Doubtless it will all end in tears, but Mr. Sykes is happy.


No, I wouldn't touch such a business with a bargepole and neither would you, but there are people who do....and are doing. Not far from me.

Now, a notaire is supposed to protect you from all this sort of thing and you will be told that all notaires are insured, so that if they are negligent, you, the client, will be reimbursed. In your dreams. Just try finding a lawyer to represent you against a notaire.

There is a case going on at the moment brought by a couple of old ladies who sold their house at well under its actual value on the advice of an estate agency. They have sued the estate agency, who won, roughly on the grounds that they told the ladies that the house would sell at that price!


Now, when you buy a house in France, part of the acte de vente deals with sales at an undervalue - thus dealing with the under the table in cash proceedings - and part of the fee you will be charged is to contribute to the operation of the notaires' database, which enables them to contest unreasonable enquiries as to value on the part of the taxman, so you would think that the notaire might just notice a drastic undervalue, wouldn't you?
No, of course not. He is a notaire.


The old ladies then started suing the buyers, on the grounds that they haven't been paid. You might think that a notaire might just notice the absence of folding stuff, mightn't you.
No....he didn't. He is a notaire.


In the meantime, the old ladies are paying the taxe d'habitation on the property now occupied by the buyers as the appropriate tax authorities noted that the ownership was in dispute and went for the bird in the hand.


The old ladies have just lost in the regional court of appeal.


You will note two things from this cautionary tale.

The notaire, the watchdog, let the whole shemozzle go through without a bleat, let alone a growl.

Nobody is suing the notaire.