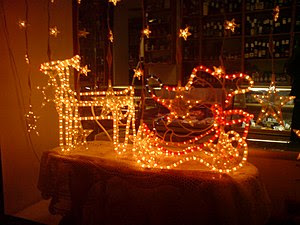 I have to go down to the next village one of these evenings, after dark.

I have to see for myself, since the postlady only passes during the daylight hours and she has not yet sifted her informants for accuracy on what is passing once the lights go on in St. Ragondin, which is on her colleague's round.


It is coming up to Christmas, and the villages round here go to town on decorations...not just the usual Santa Claus abseiling from the chimneys, but lights. Lots of lights. It has become a sort of tourist attraction. The local coach firms have run trips for the last two years while the number of cars running round the place in the run up to Christmas must exceed road usage for the rest of the year. You even see 'foreign' number plates....from neighbouring departments.

Although the comites des fetes of the villages encourage the activity, the whole thing is down to individual initiative, and very individual it can be, too.

From my point of view, it is a wonderful aid to navigation for visitors over the holiday period. Their GPS systems tend to black out when they get to the nearest town...France's equivalent of the Bermuda Triangle...and now, when I get the anxious call from the mobile 'phone, rather than trying to describe roads without signs or signs which cannot be read even in broad daylight because you pass them before they are visible, I can home in visitors by the Christmas lights.

'Right, when you come to the T junction, you turn left at the illuminated windmill with turning sails. Continue until you see the cork shooting from the champagne bottle and turn left again just in front of it. Continue again, keeping Santa's sleigh and the running reindeer on your left until you pass a house with psychedelic icicles on your right and we are the next house on the left....the dark, sinister one with towers and a security light which will blind you as you pull up.'

As long as no one changes their decor this year, I will keep my one hundred per cent record of losing no one.

As you gather, I do not illuminate my house. The president of our comite des fetes came to see me last year, accompanied by Madame Chose...a bit like making sure the warder is present when you interview the criminal lunatic.

Why didn't I illuminate my house? It was the 'big house' of this end of the commune...it would set an example...

I explained that to light up this place would involve using half the capacity of the Chinon nuclear power station, require having someone properly insured to crawl on roofs over one metre from the ground to install and disinstall everything, quite apart from buying all the gear in the first place. On grounds of expense, it was unthinkable, and, moreover, it wasn't Green.
She peered at me.

'You're not Green, you're just mean.'

She had better success with the duckstealer. His windows were festooned with lights, which promptly became invisible when he shut the shutters...I often toyed with the idea of making an evening call just to see what the interior of his kitchen looked like.....but renounced it. There are limits.

Roger the roofer always has a spectacular display, valid by night and day. His roof and walls are festooned with Santa Clauses, like the SAS storming the Iranian embassy. You wonder why there is no smoke coming from the windows. At night, he illuminates the attackers with spotlights from his garden. I hope they have thick curtains in there.

Now, as to what is reputed to be happening in St. Ragondin....

One of the men most keen on these Christmas displays is Christophe, an electrician, who gives up a lot of his time to help people with their illuminations, and invents his own displays too...I think Santa and the running reindeer is one of his.

A couple of years ago he bought a house in the main square of St. Ragondin - in case this gives any false ideas of grandeur, forget them. For main square read only square, and small, at that. He wanted to put a velux window in the roof to convert the attic to an extra bedroom, and planning permission was refused. He explained that he did not see the problem.

A St. Ragondin must be one of the most banal villages in France from an architectural point of view.

B Other houses had velux windows in their roofs facing onto the square while he wanted to put his on the back of the roof, facing out over the fields.

The reply was firm. No more velux windows in old houses.

Christophe, muttering, put up with it.

Until this year, that is.

The man from the planning department who had refused him permission for his velux bought a house on the same square and promptly installed a velux on the side of the roof facing the square. To say that Christophe was annoyed would be to err on the side of understatement, but this is France, and that's how it goes. He turned his attention to Christmas.

He has, rumour has it, installed a giant illuminated Santa Claus on the front of his roof, facing his enemy from the planning department. Not only is it huge and illuminated, but it moves.

What it moves, in fact, is a bent arm with one finger raised...the French equivalent of the 'V' sign.
I must nip down to St. Ragondin some evening....