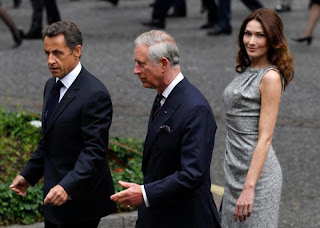 President Sarkozy has been in London to commemorate Charles de Gaulle's wartime broadcast to France, in which he urged the French to resist German hegemony.
Considering his recent meeting with capitulation to the German Chancellor it would seem that that particular message has passed Sarkozy by.

I imagine he is glad to be out of France at the moment, given the mood of the nation after the masterful display of incompetence by the national football team in the World Cup in South Africa.
Not only could they not play, it seems they couldn't sing either - well, not the   'Marseillaise' anyway. Perhaps 'Money, Money, Money' might have been better choice.
More fodder for the debate on national identity that Sarkozy was mad enough to start.
Personally, seeing that they only qualified by the hand of Thierry Henri against Ireland, I suspect that the Irish have put the Curse of Cromwell on them.

Whatever the circumstances, however optimistic the political mood, the football would have not been good news, but given all the rest......well, it's a good moment to leave the country.

Still,  politics is a funny thing....it is amazing what can be overcome with a bit of spin doctoring and a judicious bribe to the electorate administered at the right time - just look at Blair's survival.
So why should Sarkozy be worried?

He came to power offering reform of economic life in France and it is true that he has managed to make some changes...tinkering round the edges.

His problem is that his party, the UMP, have woken up to the fact that he is not one of the 'good old boys' who have run the country for their own profit for generations....they rightly suspect that he is trying to shift access to the goody bag to his type of people...the new 'kings of bling' generation.

He hasn't helped his cause by the antics of his 'court'...the blatant nepotism (here),  the vast amounts of public money spent on publicity for government initiatives, and the appointment of people more suited to public opprobrium than public office (here).
His rancorous and less than decorous pursuit of his rival Philippe de Villepin (here) cannot be said to have added lustre to the prestige of the French Presidency either...remarks about  hanging people on butchers' hooks bring up unwelcome associations.
He has even managed to make right wing voters regret President Chirac, that renowned toucher up of bovine bottoms and despair of the Academie Francaise.

The combination of these  factors lost his party a lot of votes in the recent regional elections for which his party will not forgive him.
His misjudgement in opening the debate on national identity, aimed at neutralising the Front National, has done the opposite and he has done the seemingly impossible by raising the PS - Socialist Party - from the dead.
Still, he shouldn't worry about that too much...the P.S. are past masters at arguing about the rules of a fiddling competition while Rome burns around them.

He had the misfortune to hit the buffers running when the catastrophic international banking fraud came to light, and has been forced to preside over 'austerity' measures to combat its' consequences...of which the proposals on pensions are the most unpopular.

His attacks on the press, particularly his attempt to completely take over French public television and to arrange for a group favourable to his aims to pick up the carcass of 'Le Monde' give rise to comparisons with Berlusconi..

He makes me think rather of of Napoleon trying to do a 13th Vendemiaire while Murat steals away with the guns.

But politics is a funny thing, it can turn in a moment, just as, with the funny rules of football competitions, France might yet qualify to go further, so why do I think Sarkozy's ship is beyond the reach of the salvage tugs?

Just take a look at the photographs of Sarkozy and wife in London.
Gone are the days of the demure little hat and the sinking decoratively into the background.
Look at the body language...she is always detached from the event itself, always knowing where the cameras are and performing for them as if she were once again on the catwalk - such an appropriate name for it, I always think.
He's looking to the Presidential elections in 2012.  She's looking to...a change of role.

Mrs. Sarkozy is a survivor. She's checking out the lifeboats already.