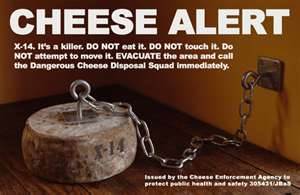 Costa Rica is not famed for the variety or quality of its cheese and a first glance at the vast slabs of white cheese on the stalls is not encouraging.
Vast slabs of smoked white cheese do not offer encouragement either, while the yellow slabs of what is fancifully called mozzarella would have a native of Naples turn her face to the wall.

There are attempts at hard cheese, by the near monopoly dairy companies Dos Pinos and Monteverde...but the resemblance to the names claimed on the packaging  is distant and the prices such  as to induce apoplexy.

The upmarket supermarkets have imported cheese on their shelves.....and are proud of their range of Gouda....but on the whole the picture is grim for cheeselovers.

I have found one man making super European style cheese in the hills round the Turrialba volcano....though the sulphur fumes from its increased activity make him doubt for how much longer his pastures will be fit for grazing.....but apart from that I now rely on buying full cream cheese in rounds from a lady at the Plaza Viquez market, draining it, then washing it in fortified wine or rum every day and keeping it in the 'fridge betweentimes, wrapped in cheesecloth.
Three months later I have something worth eating.

So, given the situation, the trip to France and the U.K. will be a chance to eat proper cheese again, and to buy to bring back.

I thought it was all so easy...

Goat cheese logs - the cheapo cheapo ones from Super U - which keep for ages until becoming deliquescent enough to eat, the skin peeling off naturally;
Fournol in its round russet coat;
Maroilles, that deep red brick with a smell that would flype your socks;
St. Agur, the creamy blue so disdained by cheese snobs;
Buy whole or halves of each for the suitcase and I was away.

That was it...until you chimed in and now, even before I hit a cheese counter, the claims of Pont l'Eveque, Comte, Bleu de Sassenage, Bleu de Bresse, Bleu d'Auvergne, Cantal and St. Nectaire are before me...not to speak of my since thinking of Salers, Fleur d'Aunis and the Mizotte du Vendee, let alone contemplating buying Tomme de Laguiole to make aligot.

My area of France was not blessed as regards cheese....goat cheese aplenty from local suppliers, the discs of 'crotte de chevre,' if allowed to dry out, being dropped into eau de vie for a month or two and eaten as an aperitif, but no specialist cheese shop within easy reach and the supermarkets distinctly variable as, like the fish and charcuterie sectors, these were run on sub franchises...obliged to take and present the 'promotions' of the central supermarket supply chain, be it Leclerc, Super U or Champion, but for the rest being left to their own initiative.

So I could be happily buying a soft textured tomme de chevre for months, then on my next visit find that the only goat offering was a chalky white ball from the Netherlands. The franchise would have changed hands.
Not that the Dutch can't make good cheese...it just never seems to make it to France...any more than do the  wonderfully aromatic Herve, the creamy Passendale and the sharp Brusselae Kaas from  Belgium.

The markets?
There was one good stall in the local town market whose Roquefort wasn't over salty and who sold a good ewe's milk tomme...d'Agour, if I remember rightly.....and whose Camembert was never ammoniac. But he was pricey.....and I only went to the market there for the stall selling small purple artichokes for deep frying.

Friends with a holiday house nearby used to go every week while they were in residence, going home laden with small rounds of Camembert to last them until the next trip.....returning once with proof positive that when the cheese man said his Camembert was made from unpasteurised milk...lait cru...it was.

Although having made his pile and retired, our friend used to like to give a hand in the family business and would cover for illnesses and holidays.
Working thus on the lorry reception area, he provided himself with a snack.
A bun with a whole small Camembert within.....not for him 'society sandwiches - six to a mouthful'.

He was enjoying his snack when a lorry arrived, so he put the bun on his desk to enjoy later and went to see to the reception procedures.
Returning some ten minutes' later, the bun and contents were where he had had left them, but his appetite had gone, for the bun lay open, two crescents marking his first bite, well into the cheese, where he now observed that maggots in quantity were disporting themselves.

So you will understand if I don't buy any Camembert.

In any case, I have to leave room for the Stilton....and the Wensleydale....and perhaps a proper Gorgonzola.