Brother in law was seduced by a Sultana.... 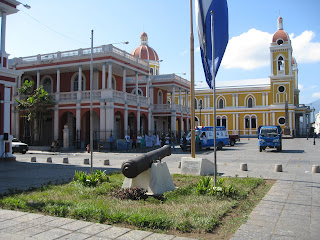 ....the nickname of the town of Granada in Nicaragua.
Everyone is seduced by it except curmudgeons like me  who have discovered that nearly everything in the historic centre was rebuilt after the attempt by a nineteenth century American mercenary to take over the country ended in catastrophe and he burned the town in his wake.
The old town, whence fleets set sail across Lake Nicaragua and down the Rio San Juan into the Caribbean on their annual route to the homeland, is just vanished history.

Never mind. Reality is not everything.

The first time I visited Granada was by international bus from Costa Rica - the pain free way of crossing the frontier.
American friends in Costa Rica had counselled me to avoid muggers by walking in the road...it was immediately clear that to follow the advice courted immediate death by being run down by a car or horse drawn carriage so walking on the pavements was the better option.

As an aside, I must say that in my view most people, anywhere, are just busy getting on with their own lives, earning a living which is not made necessarily by picking pockets or mugging and in Costa Rica, Nicaragua and Honduras I have never had the slightest problem with theft of any sort, apart from tourist restaurants where I have been stuffed for the last dollar in my possession.
Except for one incident at the border when it was an attempt to steal a passport, which was thwarted by an elderly lady selling plantain chips who grabbed the malefactor by his ear.
I have also, to be fair, been warned by passers-by and stall holders to keep a good hold of my purse because of the possibility of theft, so perhaps I have just been lucky.

By walking on the pavements in Granada I was able to catch glimpses of the interiors of the colonial style houses....rooms built round open patios for coolness, luxuriant with columns, wrought iron doors and water...and was given advice on a hotel by the ladies sitting in their rocking chairs on the wide pavements.
Good advice.
Local owners in a town where the hospitality industry seems to be increasingly in foreign hands, clean rooms, hot water and great food at the bar. Right in the centre too.

This time we went upmarket, while brother in law adjusted his sights on Central American hotel pricing, but it was in the same street which at night was full of tables spilling out from the many bars and cafes, with music, parades of giants and the endless clip clop of horse drawn carriages taking the tourists round the town. 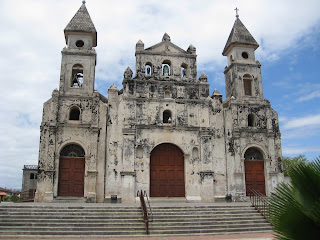 He tramped the town with his camera before breakfast, returning with more photographs than there were buildings, bewailing the lack of funds to maintain some of the gems, such as the church on the right. He  found some super non touristy ceramics, too, made in the potters' village of San Juan de Oriente some kilometres away, which were for sale in a shop that seemed to be having a hard time keeping going in the face of the New Age tat  vendors in the square and the itinerant hawkers of pots for the tourist trade.

He had also done a reconnaissance for where to eat breakfast and led us to a good spot in the arcades near the cathedral where all sorts of good things were offered.
We ordered and sat, people watching, in the morning cool.
A few minutes later a loudspeaker van turned up.
It played music. Loudly.
Then 'organisers' took it over, broadcasting at top volume that Granada, and Lake Nicaragua on whose shores it stands, were international, not just national. They belonged to everyone.
Further, there was a campaign to stop littering.
Further, they would welcome foreign volunteers to pick up litter.
We were deafened right through an excellent breakfast and then, as we finished our coffee, the din stopped.

Later brother in law strolled down to the lake, where the mosquitoes hum in clouds over the open sewers of the town, and photographed several worthy souls with gloves and pointed sticks, picking up litter. All foreigners.

The organisers would do better to get the town council to provide proper rubbish collection rather than deafen innocent tourists over their breakfast.
But that wouldn't be as much fun as getting the heirs of the supposed colonial oppressors to pick up your litter, would it?