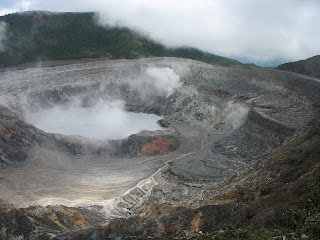 Before visiting Costa Rica for the first time, my image of volcanoes was that of the primary school geography book....some sort of mountain with a hole in the middle through which lava would rise to the surface at unpredictable intervals, sowing death and destruction and, after a considerable lapse of time,  degrading into fertile soil in the vicinity. Living near a volcano seemed rather chancy....too well into the fertile soil era and the blasted thing might be likely to have another go at the death and destruction bit again.
Knowing my luck I know which I'd get.

From our little house in the hills I can't actually see any active volcanoes, but I have visited two which are within easy reach and in each case was astonished to find that I could approach near enough to peer down into the craters - restrained from a plunge to my death only by wooden railings. Not a good place for little Johnny to drop his favourite toy.

I have a feeling that if the U.K. had volcanoes, no one would be allowed to approach them at all and would only be allowed to see films of them in visitor centres on the grounds of health and safety, whereas in Costa Rica you can get close up and personal unless the things are actually chucking rocks about.

I'm sure it will change....the European Union have been here recently, advising local government on how to set up a tax base and I'm sure they're behind the new draconian driving laws too, where the fines imposed for not wearing a seatbelt would bankrupt a family on the average wage.
Where tax and seatbelts lead, health and safety cannot be far behind, so if you want to sniff the sulphur, come to Costa Rica soon - or go to Nicaragua where the EU seems to be concentrating on providing local NGOs with large gas guzzling 4 x 4s instead.

The photograph above is of the Poas volcano, a little north of the capital San Jose, taken from behind the railings which is about as close as I would care to get. The approaches are superb, as you climb from the floor of the Central Valley through pine forests with Swiss chalets and cows to the national park, whence you approach the crater through masses of gunnera bushes and suddenly the verdant green turns to grey rock, yellowish fumeroles and the dark water of the crater lake.

The photograph below is of the Irazu volcano, an altogether nastier looking beast high up above the old capital, Cartago. 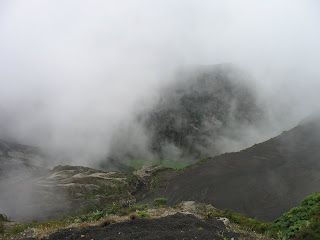 The green splotch in the middle is the crater lake - as seen behind the railings again in one of the brief moments that the driving wind, rain and cloud permit a photograph to be taken. The surroundings, unlike at Poas, are burned black and the access points are much more limited.

You can go anywhere in Costa Rica by bus and Irazu is no exception. A bus runs once a day from the capital, and I have taken it twice.

The first time, the warm, sunny weather in the San Jose area began to turn chillier, wetter and windier as the bus climbed out of Cartago to the national park. The bus driver, like most of his kind in the country, was most helpful, collecting our money and descending to pay for the entry tickets at the park boundary.
By the time we reached the car park, it was blowing a gale and, not realising that I had warm clothes and a brolly in my bag, he insisted on my taking his own sweater to wear. It took a bag inspection before he was satisfied that I would be warm enough outside the safety of his bus.

The next time, building on this good experience, I went with a friend who was visiting.
We found the bus in the centre of San Jose, where two other tourists, a Swiss couple, were waiting. The driver, a young man, sat stolidly in his seat, the bus door closed.
We waited. The departure time was approaching. There was movement within and we started to get out our purses to pay the fare.
False start. The driver was sweeping out his bus. Purses away.
He opened the door. Purses out again. The Swiss lady headed for the door. The driver swept the rubbish out over her feet. He shut the door again. Purses away.

We were eventually allowed to board and pay and he drove us towards Irazu.
We had to settle our own tickets at the park boundary and as he set us down in the bleak car park, he announced that we had to be back at the bus fifteen minutes before the time scheduled.
Irazu was blanketed in swirling cloud and was shortly to be overtaken by diluvial rain, so a shortened visit was not too much of a problem.
It all cleared for about ten minutes but then we were driven to take shelter in the visitors' centre, which was quite jolly as we were sharing its' close confines with two school parties - well behaved - and an american tour group who could not believe that we Europeans would trust ourself to local bus services.

They must have been better informed than we thought.

We emerged at the appointed time, only to find that the bus doors were firmly closed and there were no signs of life.
We waited until the scheduled departure time. My friends' hands were turning blue.
The Swiss gentleman had had enough.
Boldly he approached the front of the coach and fiddled with something under the protective housing.
With a welcome hiss, the front door of the bus swung open and we all bolted aboard.
Warmth!

Suddeny, the driver emerged, red eyed and loaded for bear, from the back of his bus.
'Everyone off the bus!'
'This bus will not leave until everyone is off the bus!'
We thought it quite probable - given his mood - that once we were off the bus it would certainly leave, without its' passengers, ticket or no ticket, so chorused as one
'We don't understand Spanish!'
He stormed from the bus, shutting us in, and went off to gather support.
He tried the park rangers.
We could see them shrugging and shutting the window of their hut against him.
He tried the visitors' centre.
No joy there.
He tried the toilet block.
Goodness only knows what support he expected from its' occupants.
There wasn't anything else he could do, except for asking Irazu to overwhelm us in lava, so eventually he came back and drove us down to the capital.

On the way, we discovered the likely origin of his fury.
Half way towards Cartago the bus made an unscheduled stop and a young lady descended from the back door.
A very attractive young lady.
Our Swiss colleague guffawed. And then explained.
Clearly, when he had opened the front door of the bus, the back door had opened as well and our driver had received a sudden gust of Irazu's finest which had most likely dampened his expectations.

Ruddy foreigners. No respect for anything.