Return of the lobster 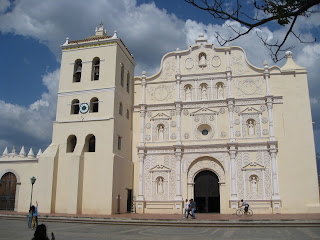 There is a large red object in a number of the photographs that brother in law has been taking during our trip in Central America.
It resembles an oversized, well boiled lobster.
It is me.
No,  I am not putting up a photograph. There are limits. You're getting one of a disappointing clock instead.

I have two regrets about our trip.
One, we did not make it to Guatemala.
Two, I went bright red on day two and stayed that way for the duration, despite hats, shade and aloe vera cream. Is it really too much to ask that I could go brown?

The first regret isn't much of one, as we saw so much to please and fascinate in Nicaragua and Honduras that we all want to go back and explore further. Guatemala can wait.

There was something for each of us.
Brother in law, who kindly took the bulk of the driving, wanted to see Mayan ruins, so we visited Copan and its' little sister site El Puente - which I liked much better, though that could have been because the curator was kind enough to give me two hours of his time explaining the history of the site and the significence of the exhibits in the museum. It didn't hurt that he was extremely handsome and charming as well as erudite and patient.
It would have been nice not to have looked like an overcooked crustacean in his company.
If we had visited El Puente first I would have understood why Copan left me cold, despite all the hype.
A different culture some of whose monuments resembled modern art works until the Copan culture took over later in the history of the site.

Mr Fly wanted to see plants and found lots that were new to him, thus giving rise to hair raising cries of
'Stop the car!'
Usually on a hairpin bend.
He has garnered an alarming collection of seeds and went beserk at a nursery in northern Nicaragua, leading to a guilty session of rolling plants up in the washing in the suitcase in order to smuggle them back across the border into Costa Rica.
And before anyone starts whingeing about introducing non native plants, the two countries are contiguous and the point of buying the plants in Nicaragua is that they were about a quarter of the price demanded in Costa Rica...even if you could find them for sale.

I wanted to see Spanish colonial towns and I had a surfeit!
When we reached one of them, tucked away in the pine forests in Honduras, I could completely understand why its' founder called it 'Gracias a Dios'.
It must be what he said when he finally found a suitable site in the surrounding wilderness!

We were all suckers for sitting in the shady central squares with a plastic bag of fresh fruit drink to be drunk through the straw tied into the bag.
We all enjoyed searching for somewhere to eat in a strange town - except in Copan, which is a tourist rip off on the grand scale - and no one had food poisoning despite all the fears about the ice in the drinks and the water in which the salads had been washed.
This is considerably more than I can say for eating out in France.

We have had memorable meals.
One of the best was in the bus station in Santa Rosa de Copan where the lady only had the water she had lugged in in a large bin so to save washing up the plastic plates were covered in cling film. She deep fried tilapia from the nearby lake in an old saucepan and it was cooked to perfection. Crisp skin and melting flesh within.
Celebrity chefs eat your heart out.

Brother in law discovered plantains in all their manifestations and became addicted. Plantains figured at every meal from morning to night. Boiled in fish soup, fried with rice and beans, covered with refried beans and sour cream, plantain chips.....the only way I didn't see them presented was as a sandwich.

We had setbacks, of course.
Crossing the border from Costa Rica to Nicaragua took hours...most of them spent in waiting in a queue of vehicles in the no man's land between the frontiers....but that meant that we spent the first night in Granada rather than pushing on for the north, so could enjoy the architecture and the atmosphere.

The car lost its' brakes on a hillside in the wilds of Honduras.
A minivan passed, stopped, took Mr. Fly into the next village and came back with a mechanic. Refused any payment.
The mechanic took the car - driving it, not towing it - to his workshop, a tin roof on stilts, and analysed the problem.
He could get the parts, so, if we wanted to wait five hours, someone would go by bus to fetch them or, if we were in a hurry, a friend would drive there, but it would cost more.
We plumped for the car and went into town to draw money at the bank.
He asked us if we trusted him with the money or would we prefer to go with the friend to buy the parts.
We plumped for trusting him.

Within half an hour of going to the bank and sitting in the central square we were the object of everyone's attention.
San Juan las Collinas is on no one's tourist trail - and it wouldn't have been on ours had our intrepid navigators not made one of their erratic choices at a fork in the road.

A gentleman in a pick up hailed us in english, and told us that if the car wasn't ready that day we could stay with him and his family.

Another gentleman walking his dog directed us to the lake and the path up the hill above the town.

A further gentleman, seeing that we were reading, asked if we were reading 'The Word' - his way of referring to the Bible.
Learning that we were not, he informed us that all other literature was sinful and for good meaure told Mr. Fly that if he stopped smoking he would not be as thin as a rake but as  fat as his wife.
All with perfect good humour as befitted the town wiseacre.

Children tried out their english.

Not being a tourist town, there were no beggars.

We took a tuc-tuc out to the garage, where the assembled staff and friends were enjoying having a look at the car.
A delightful boy called Brian, all of eleven years' old, was the self appointed guide to events, ranging from an inspection of the litter of puppies to a run down on how disc brakes worked, culminating in the announcement that now that his brother - the mechanic - had fixed the brakes we had better be careful we didn't go through the windscreen when using them.

We were on our way from that hospitable town in five hours flat.
A pity that the frontiers aren't as well managed.

There was a disappointment, too.
I had read that the oldest clock in Central America was to be found in the bell tower at Comayagua, north of the Honduran capital. Originally housed in the Alhambra in the Spanish Granada, the twelfth century piece had been presented to the town by Philip II of Spain.
We wanted to see it.
Well, I don't know what they've done to it but it is singularly unprepossessing.
However, we had landed in Comayagua in Holy Week and that more than made up for the clock.

I have seen Holy Week processions in Seville on the TV, so was expecting something solemn and formal.
Nothing of the sort.
The images on their floats swayed from side to side on their route through the town, preceded by a man with a pole to hitch up the power lines....Christ bowed to his mother to the applause of the crowds....children took the parts at the Stations of the Cross...dear little girls with angel wings who represented the seven last words were borne in sedan chairs before the bier at the deposition....Mary Magdalen dashed about all over the town looking for Christ and word from the Vatican has not reached Comayagua that Saint Veronica didn't exist.
While all this was going on, food stands sold all manner of meals accompanied by a memorable rum punch and the piped music that filled the square ranged from Strauss walzes to the Girl from Ipanema.
A truly popular, happy event.

What was most remarkable to me was the phenomenon of the carpets of sawdust laid to ease the feet of Christ on the roads to be used by the processions.
Not just plain, ordinary sawdust, but art works made in different colours with stencils.
Apart from the expected religious and municipal themes, there were also others using the occasion to express their views on the late political unrest, including one featuring guns and the names of those from the town who had died in the repression.
A peoples' event. 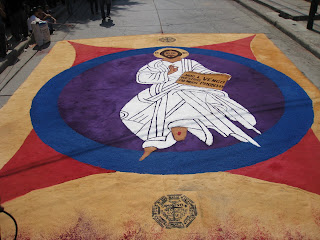 We have had a splendid time, but without brother in law we would not have been able to even think about the trip, given the driving involved.
He returns to Australia on Monday, so we can only hope that the lure of the plantains will bring him back to Costa Rica for another attempt on Guatemala.